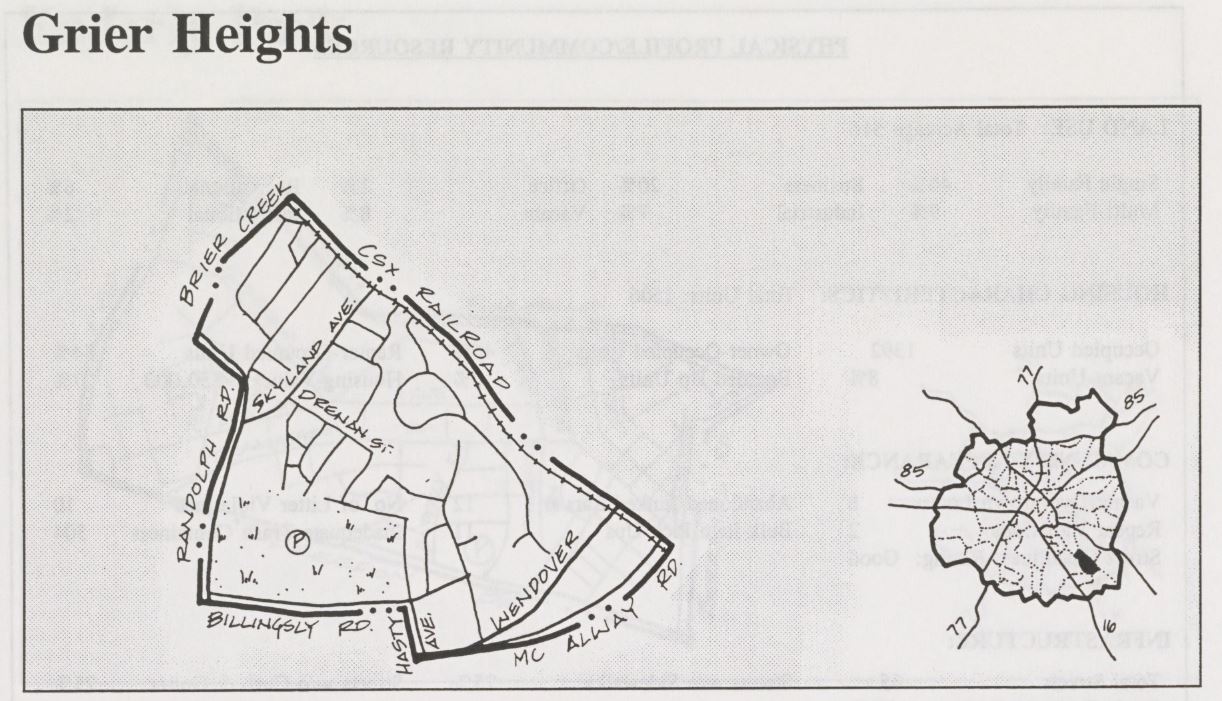 City within a City : Neighborhood Assessment1

Grier Heights’ identity as a Black community runs all the way back to the 1890s, when Sam Billings, a formerly enslaved man, bought 100 acres of land in the area — the first recorded time an African-American bought land in Charlotte.

Grier Heights originated as a farming community of four houses in 1886. The community, originally called Grier Town, was a suburb that was home to lower-income and middle-class Black families, some of whom were teachers, masons, or worked for the U.S. Postal Service.2 By the 1920s, Grier Heights was home to several of Charlotte’s prominent Black residents, including Arthur Samuel Grier, a funeral-home director for whom the community is named, & James McVay, founder of Grier Heights’ Antioch Baptist Church.3 In 1907, Sam Billings, John Jackson, Arthur S. Grier, Lee Father MacDuff Dinkins, & James McVay purchased additional land. The neighborhood grew slowly until the 1940s, when prominent African-American businessman Arthur S. Grier built 100 homes that were sold to Black soldiers returning from World War II.

In 1927, landowners pursued the need for a school, however the Board of Education offered only a frame structure. Instead, the community, supervised by Nellie B. Dykes raised $505.00. The School Board Committee granted another $500 & the Rosenwald Fund provided funds as well. Sam Billings sold two acres & donated an additional acre for the school. The school came to be known as Billingsville School, which offered grades 1 thru 9 until Randolph Junior High School was built in the 1960s.4 Today, Billingsville School has been renovated into the Grier Heights Community Center. A low cost medical clinic, adult literacy tutoring & GED classes are offered at the center.5

Like many other inner-city neighborhoods, Grier Heights faces gentrification, houses being converted to rental property, & other issues that are all-too-familiar to many communities in the Charlotte area. The neighborhood, bordered by Randolph, Wendover, Monroe, & Briar Creek Roads,6 is adjacent to several highly sought after & extremely affluent neighborhoods. Residents, however, have continued the community’s tradition of resilience by working with local non-profits such as CrossRoads Corp., Charlotte-Mecklenburg Police Department,7 & the Grier Heights Community Improvement Organization Board Retreat, hosted by the City of Charlotte in 2014.8

Grier Heights was formed by newly freed African Americans as a settlement outside Charlotte's city limits in the late 1800s. Starting in the 1930s the community was further developed by businessman and community leader Arthur S. Grier. Today, Grier Heights is experiencing significant change as part of the expanding urban core of Charlotte. This collection consists of interviews with members of the Grier Heights community, bringing awareness to the issues and successes of neighborhood members.