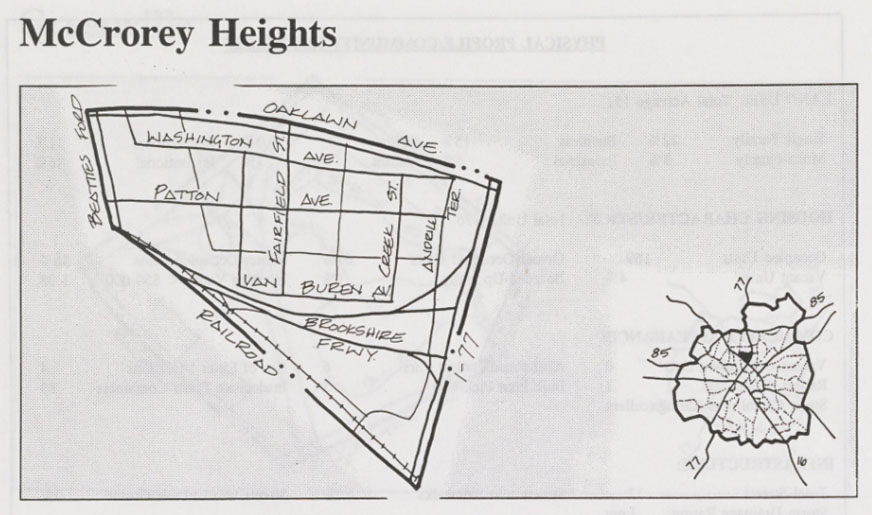 McCrorey Heights was founded by Johnson C. Smith University President Reverend H.L. McCrorey in the early 1900s. Reverend McCrorey had previously worked at the Progress Investment Realty Company, purchasing land in what is now Washington Heights. He used the income he generated in rentals to build McCrorey Heights.1 McCrorey had a grid of streets laid out as early as 1912 and a small number of dwellings on Oaklawn Avenue date from his first attempt at development.2 It was almost 40 years later before the neighborhood was truly established.

Despite the strength and legacy of McCrorey Heights, many sites have been lost. Second Ward High School was also closed in 1969 after integration.5 The development of highways and transportation projects has also changed the neighborhood - it is currently helmed in by I-77 and Route 16 on the east and south and Beatties Ford Road and Oaklawn Avenue on the west and north.

An incredibly detailed history of McCrorey Heights is maintained by Tom Hanchett.

2006 December 7, Saunders talks about urban renewal and how part of the Biddleville neighborhood was torn down and describes some of the other African American neighborhoods in Charlotte, including Greenville and McCrorey Heights.