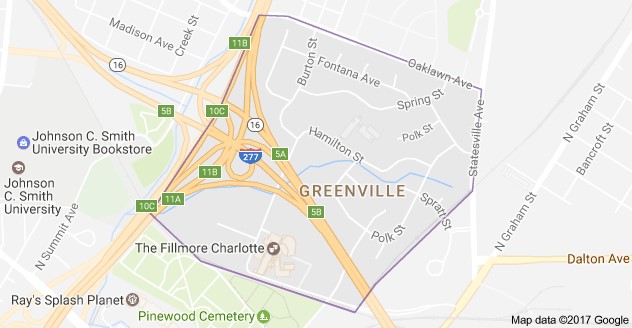 ​Greenville was one of the six villages to develop in a ring around the township of Charlotte in the 1890s (the others were Biddleville, Blandville, Seversville, and Irwinville). Except for Seversville, which had developed surrounding a white-owned country store, each of the villages were populated by Black residents by the time they were included in the city directory. Thomas Hanchett notes that except for the Biddleville & Cherry neighborhoods, it is difficult to visualize these villages as they were, because of urban renewal efforts in the 1960s.1

Both Greenville and Irwinville were demolished as part of the Greenville Urban Renewal project. In a 1993 oral history interview with Atkins Library, Thereasea Delerine Elder, then chairman of the Greenville Historical Society, spoke about growing up in the community & efforts of residents to stay in the area after demolition. She lived on Hamilton Street, in front of the Southern Asbestos Company Mills [what is today the NC Music Factory]. The mill created much waste and Elder remembered cleaning their screens & doors twice a day during summer, and playing in a mill waste dump as a child. She believed the mill affected the town’s residents and especially those working in the mill, as she had family members who died from lung cancer and remembered the mill workers as “very small,” and coughing a lot, while they also smoked. Elder stated her personal belief that the Greenville community was intentionally demolished to spread the community apart. But Greenville’s residents came together to push the city to contract with the community to rebuild some homes after the demolition.2

In 1966 the Urban Renewal Committee issued its plan for First Ward, Greenville, Dilworth and other downtown projects. The report designated fifty-eight of the area’s 272 acres, 214 of which were located in Greenville, to be used to build an expressway. Citing Greenville as one of the “more extensively blighted areas of the community” with almost seventy percent of the structures blighted, the plan also recognized the massive amount of homes that would be destroyed. Because of this, the proposed plan sought to reserve eighty-eight acres of land for residential development; an estimated 1,760 dwellings. The image below depicts the large amount of land that would be needed for the expressway. 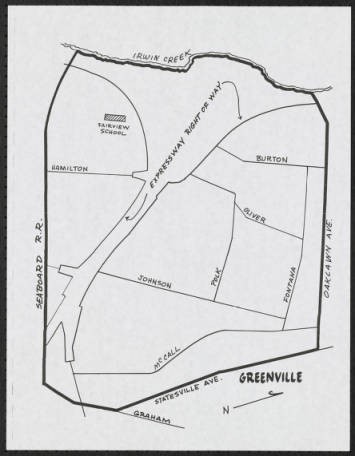 In April of 1972, Greenville resident Margaret Green Harris sued the U.S. department of Housing and Urban Development to challenge the displacement of people in urban renewal neighborhoods who were not offered alternative housing. The suit cited that 631 of the once existing 763 housing units in the neighborhood had been destroyed by urban planning.3 The case, Margaret Green Harris v. HUD “resulted in a resolution that displaced people must be offered alternative housing. ”The suit was negotiated to a settlement in 1972, but it left little assurance that all displaced citizens would be offered affordable housing. Starting a career with the Legal Aid Society of Mecklenburg County in 1973, Ted Fillette began offering legal assistance to people displaced by urban renewal. The Legal Aid Society would continue to monitor city efforts to create affordable housing & Fillette would go on to aid the Cherry neighborhood in their fight for public housing.4

Hanchett writes the Greenville section “north of Fourth Ward was leveled and replaced with suburban Ranch style houses in the early 1970s”5 a clear effect of the negative attention the city received during urban renewal efforts. In the early 1990s, The Housing Partnership purchased land to build affordable houses, seeing “an opportunity to make a visible change in an up and coming community.” Forty new houses were built on Polk Street and Wearn Court, which were sold by 1992. Seventeen more homes were built in 1993 on Spratt & Johnson Streets. The Partnership also rehabilitated and sold nineteen holds in the older section of the community. The neighborhood itself has banned together in an attempt to maintain an atmosphere of community. The “award-winning Greenville marching band,” under Pop Sadler, has taken in neighborhood kids, while an active neighborhood association formed its own yearly festival.6

Photographs of the Greenville neighborhood from the Charlotte Redevelopment Commission

1993 June 25, Recounts her life & career as a public health nurse. Mrs. Elder discusses growing up in the Greenville neighborhood & the negative effects the Southern Asbestos Company Mills had on the health of her family & the community.

2006 December 7, Ms. Saunders talks about urban renewal & how part of the Biddleville neighborhood was torn down. She also describes some of the other African American neighborhoods in Charlotte, including Greenville & McCrorey Heights.