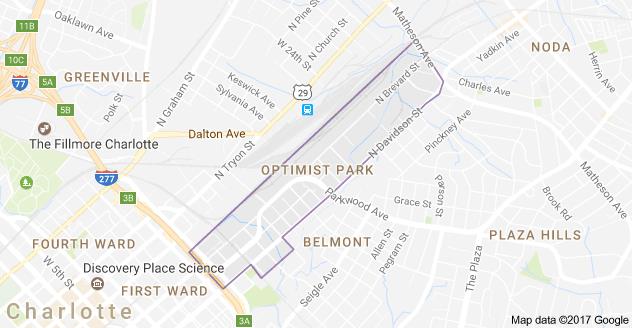 The Charlotte-Mecklenburg Historic Landmarks Commission groups what is now the Optimist Park neighborhood with neighboring Belmont and Villa Heights in its history of the area. This northern sector of Charlotte became suburban by the turn of the century but would never reaching the status of “streetcar suburb” that Dilworth or Elizabeth held, even though it had local streetcar access by the 1910s. Bound by railway lines, industrial development transformed what was once farmland into cotton mills. The Alpha Cotton Mill, built on the southern tip of Optimist Park, was one of three built in the area in 1888, designed and built by D. A. Tompkins.1 The mills represented part of the general expansion of the new south city in the 1880s and in the 1890s, private developers added subdivisions between the erected mill villages. This solidified that the area would house and become synonymous with predominantly blue-collar residents.2

By the early 1910s, the city began included major streets on maps and in directories, allowing historian Thomas W. Hanchett to elaborate on the residents residing in the area. He found “The vast majority worked in nearby factories as mill workers, molders, machinists, or overseers.” Others “worked in the building trades. Most of the earliest residents of Parkwood Avenue… were carpenters, bricklayers, or plumbers, and other streets usually had one or two such artisans.” Storekeepers were also prevalent. Since most residents walked to work and did not use the streetcar (extended to them by 1910) for daily transportation, grocers and general merchandise stores were visible on almost every corner.3

Optimist Park’s current “conscious sense of identity” did not begin to form until well into the twentieth-century. Hanchett noted the mill villages and subdivisions built in the area were erected during the era of Jim Crow; meaning the area had only white residents. He found that pattern continued to at least 1962, only shifting in the wake of urban renewal and the destruction of historically Black housing in Brooklyn, Greenville and other areas. Another reason for population shifts occurred in the 1950s as residents moved away from Charlotte’s Center City and into suburbs. This happened at the same time as mills began closing and traditional jobs were displaced from the community. Urban renewal demolition created “a tremendous demand for affordable housing by Black renters and former homeowners,” and by 1985 the area’s residents were almost entirely Black.4 Unfortunately, “crime, poorly maintained houses, low educational levels, and unemployment” plagued the community, causing more and more residents to leave the area.5

In 1983, seven Charlotte churches came together to establish Habitat for Humanity of Charlotte, with the major goal of housing the city’s poor.6 Chairman John Crosland, Jr. contributed to the initial fund of the organization and helped to inspire others in the Charlotte area to help fund the mission to provide housing.7 In 1987, Charlotte was chosen as the fourth site of the week-long Jimmy Carter work project. The Washington Post reported Carter “traveled by chartered Trailways bus to a hot and sticky inner-city slum” to spend “a week as a volunteer carpenter on a housing project for the poor.” That slum was Optimist Park and the project was one of the most ambitious yet, seeking to “build 14 houses, covering an entire city block, in just five days.” By 1987, Optimist Park was considered to be a struggling section of the city. At the beginning of the decade, ninety-seven percent of houses in the neighborhood were considered deteriorated or dilapidated.8 Unlike the limited support Habitat projects had received in Chicago, Charlotteans overwhelmed the Habitat office with offers to help with the project and more than 350 volunteers aided the building of houses in Optimist Park each day for a week. The Habitat program enabled more than a dozen families to own their own homes, paying down a no-interest mortgage in payments of $150 per month.9 The program worked so well, that more homes were built in the years to come, increasing the neighborhood’s home ownership rates.

In 2016, the UNC Charlotte Honors College began a project to document Optimist Park residents’ thoughts and memories surrounding the community. Entitled “Small but Significant,” the endeavor used students to conduct oral histories with residents. Many of the histories focused on the future of the community, whose residents are aging, and changes the light rail and new construction might bring. These interviews shed light on the growing concern of gentrification and how it might change the community, as well as the development of the Optimist Park Community Association and its efforts to fight drug prevalence in the neighborhood, and later, the new construction approved by Charlotte’s city government.10

As resident fears have noted, the area hasn’t escaped expanding gentrification, which is spilling over from nearby NoDa, located within walking distance. In 2005, historic Alpha Mill opened as a residential property, offering studio, one and two bedroom apartments in “a historic, restored mill with modern amenities.”11 With 167 rental units and more than 140,000 square feet of space, contractors were able to utilize most of the original construction.12 While the project ensured the preservation of a new south landmark, its development placed luxury apartments blocks away from Habitat houses built to help low-income residents remain in the area. In 2016, Charlotte Five published an article entitled “9 Ways the Blue Line Light Rail Extension will Totally Reshape Optimist Park,” reporting that eight commercial and residential properties were either being built or revitalized, potentially adding over 1,300 apartments and 48,000 square feet of retail space.13 These projects, coupled with the city of Charlotte’s plan to improve Parkwood Avenue streetscapes for easier pedestrian connectivity to the proposed Parkwood Avenue light rail station, detail the intense changes that threaten long-time Optimist Park residents.14

2015 October 17, Mr. Heath discusses his passion for music and participation in the local jazz scene as a trumpet player and composer as well as his service to the Optimist Park community through tutoring boy scouts and supporting programs to alleviate poverty at his church, the Fifteenth Street Church of God

2006 August 25, Mostly speaks of the Belmont neighborhood, but does voice concerns over the impact of Habitat for Humanity in Optimist Park.