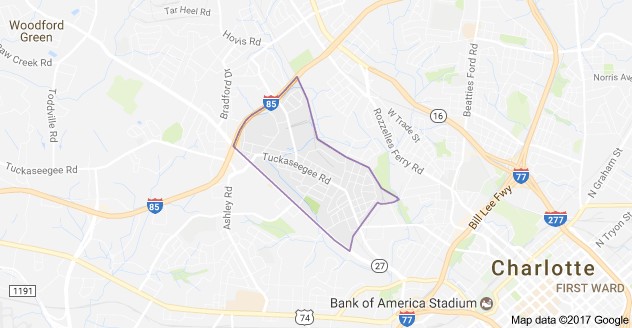 ​According to research conducted by UNC Charlotte’s Charlotte Action Research Project (CHARP), the Enderly Park community was a white, blue-collar, middle class throughout much of the twentieth-century (1920-1980). Around 1980, demographics began to shift as more African Americans moved into the neighborhood; unsurprising, given Enderly Park’s proximity to other Black communities. Its early growth can be attributed to a federal army base, Camp Greene, built in the neighborhood during World War One, and the subsequent development of communities around Enderly like Wesley Heights and Biddleville.1

The West Charlotte neighborhood of Enderly received its name from the Enderly Estate; the home of Captain Sydenham B. Alexander, a Civil War soldier, North Carolina senator and congressman in the late nineteenth-century.2 In 1917, the Charlotte Observer noted “...some years ago Capt. Sydenham B. Alexander bestowed the name of Enderly upon his suburban estate near Charlotte,” unaware that its premise would soon be filled with soldiers from the United States Army.3 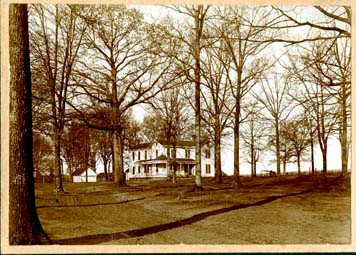 At the turn of the twentieth-century, Enderly Park was a rural farming community with limited commerce. Its growth is linked to a decision by the federal government to build Camp Greene, a 6,000 acre army base in the community’s southern portion, along Tuckaseegee Road. Alexander’s Enderly Estate became the military headquarters of Camp Greene, with the Charlotte Observer noting the grazing cows had been replaced by “a magic city...sprug up inhabited by people hustling about clad in uniforms that merge into the distinctive coloring of the brown dirt of the surroundings.”4 CHARP found that although the camp was not utilized long, “it brought massive growth in capital and population…” and “pressured the city to repair and expand Tuckaseegee and Dowd Roads,” aiding growth further.5 According to historian Edward S. Perzel, Charlotte sent a delegation to Washington D.C. in the summer of 1917 to compete for a new army base the federal government wanted to build in the south. On July 13th, Camp Greene was announced and ten days later, 1,200 men began working on building the camp. The camp was named in honor of Nathaneal Greene, a Revolutionary War General, and boasted “2,000 buildings and a 60-acre hospital facility with 2,000 beds.” Horse stables, a bakery and zigzag trenches were built, the latter to train soldiers in trench warfare. A YMCA was also constructed, which allowed around five hundred men who were recent immigrants to America, to take English lessons. Most troops came from New England or western states and at one time, 14,000 Black troops were stationed at Camp Greene, which in all, “added 40,000 people to the Charlotte area.”6

The camp spurred economic growth in Enderly Park and beyond. During the war, the U.S. government established the Fosdick Commission to aid relations between bases and local populations. Perzel noted “In Charlotte, commission members made sure that soldiers had rooms in the city and found space for visiting families. Townsfolk provided socials, band concerts, and community sings.” Churches also hosted soldiers and invited several into local homes for dinner after Sunday services. Many of the men stationed in Charlotte returned after the war to settle. Perzel links the camp to the beginning of “Charlotte’s growth as a major city.”7 Joseph C. Boyarsky was one of the service men fitting this description. After being sent to Camp Greene during WW1 to train and organize air service mechanics, he returned to Charlotte after the war to marry a woman he had met during his time stationed at Greene. He also experienced the influenza outbreak of 1918 that struck the city of Charlotte, and camp Greene, severely.8 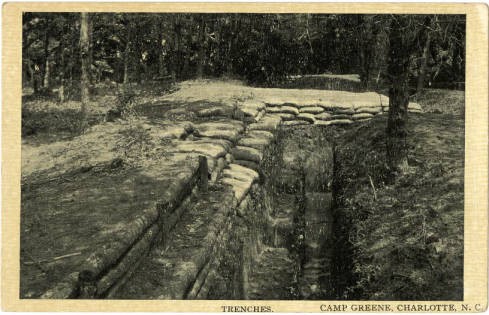 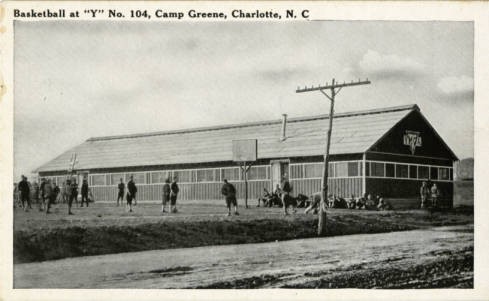 Enderly Park also bordered Charlotte’s only turn-of-the-century amusement park, Lakewood Park. Located on ninety acres of land bordering a lake, created by a dammed tributary of the Stewart Creek serving the Southern Power Company (late Duke Energy), Edward Dilworth Latta built the park, which was serviced by Charlotte’s trolley system.9 Lakewood “included the largest carousel existing at the time in the United States, a Ferris wheel, shooting galleries, a bowling alley, flower gardens, fountains, steel-lined ‘unsinkable’ rowboats, a swimming pool, and a dance hall that claimed the ‘best floor in the city’ and featured a 12 piece orchestra.”10 Additionally, a roller coaster was added in 1910, traveling over 2,000 feet of track with seven dips. A theater known as the Air Dome theatre opened a year later, and a petting zoo was added in 1915. The park became a frequent form of entertainment for Camp Greene soldiers and couples alike. According to historian Brandon Lunsford, Latta sold the park to Southern Public Utilities in 1916 and Duke Power later operated the park until 1933. On April 9, 1936, a tornado destroyed the dam, washing out the lake that served as the park’s central attraction. Thanks to the Great Depression, attendance had dropped significantly and after natural disaster, the park was not rebuilt.11 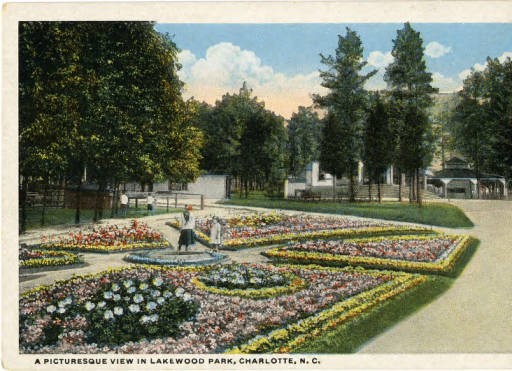 Most of the historical research conducted on Enderly Park was either formed around Camp Greene or investigated by the Charlotte Action Research Project (CHARP) at UNC Charlotte. CHARP formed a relationship with Enderly Park residents as early as 2009 and collaborated on several small scale projects with neighbors. The group set up neighborhood improvement projects, book drives, cleanup events, holiday parties and secured funding for and implemented a community garden and other gatherings. While the neighborhood continues to face challenges such as low household incomes and high crime rates, the neighborhood is also an active one, with three neighborhood organizations, community and recreation centers, businesses, and other conveniences. But as one Charlotte Five article explains, the neighborhood is poised to be swept by changes and gentrification, like neighboring Wesley Heights and Seversville. Community leaders and residents are, however, seeking to persuade developers to balance the new with the current community as they welcome revitalization.13

1979 May 22, Discusses his service as a fighter pilot during World War I and how he became the postmaster of Charlotte. Other topics discussed include how he moved to Charlotte permanently after he married a woman he met while stationed at Camp Greene during World War I, the influenza outbreak at Camp Greene, and urban growth and development of the city.

1979 May 24, Discusses his career as an obstetrician in post-World War II Charlotte, NC.

1979 May 24, Describes growing up in Charlotte during the early twentieth century as the son of former Charlotte mayor (1899-1901) Johnson D. McCall.

1979 May 22, Describes his experiences overseas serving in the Sixth Machine Gun Battalion while plagued with the flu and measles during World War I.

1979 May 22, Recounts her experiences living in Charlotte, NC over the previous sixty years.

1979 May 25, Shares his memories of Charlotte during the first thirty years of the twentieth century. He describes the city's geography including businesses, theaters, the original Charlotte Speedway (built in 1924 in the Pineville area), and the development of the Myers Park, Dilworth, and Chatham Estates (now Plaza Midwood) neighborhoods.