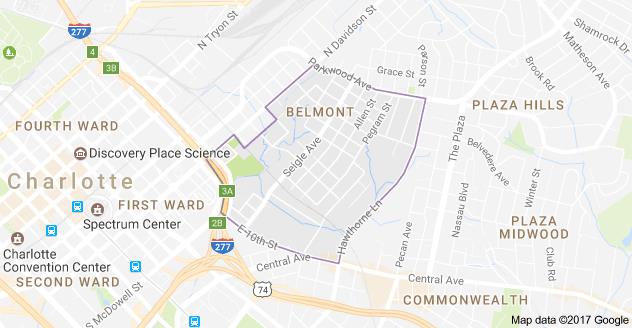 The northeastern Charlotte community of Belmont dates to the turn of the century and, along with neighboring Villa Heights and Optimist Park, was serviced by streetcars upon its inception. Railroad tracks bordering the southern and western edge of all three communities sparked its industrial development and three mills were built within the area. Louise Mill, the third to be built in the area, stood between Louise Avenue and Hawthorne Lane and included seventy-two cottages for workers which linked Pamlico, Louise and Pegram streets. Residents of all three communities were “almost without exception blue-collar workers and their families.” Thomas Hanchett describes the communities’ significance stating the area “was Charlotte’s first entirely working-class suburban district” whose residents aided in advancing Charlotte’s position as a leading textile producer.1 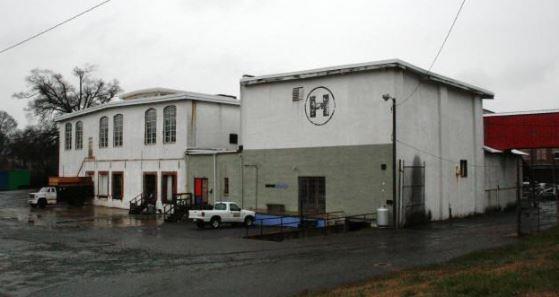 Louise Mill, which employed between 300-400 workers, closed in 1957 as the demand for cotton goods decline nationally.2 The Belmont community continued as a white working class neighborhood into the 1960s. Hanchett found that as late as 1962, “there were virtually no Black residents in the survey area north of Belmont Avenue.”3 But urban renewal would drastically shift the area’s demographics. As housing was destroyed in Brooklyn, Greenville and other historically Black communities, the demand for affordable housing intensified. In the mid-1960s, Black Charlotteans began renting and purchasing homes, as many whites moved out of the community.  Piedmont Courts was the city’s first public housing project. It opened in 1940 and was originally a whites-only facility, but with an influx of Black residents in the 1960s and desegregation, Black residents were allowed to move in. Because of urban renewal and a low housing supply, many Black working-class families were forced to turn to public housing and, over time, the area saw an increase in crime, drugs, and violent activity that left residents concerned for their safety.4

Girvaud Justice, one of the first students to attempt to integrate Charlotte schools, remembers being one of the first Black families to live in Belmont in the 1960s. Soon after the move, white residents began to leave the community, and Justice remembers the constant battle to keep drugs and violence from the neighborhood. Even in 2006, she was beginning to see the changing community demographics and felt as though the neighborhood was “up for grabs” in the minds of whites.5  By the 1980s, “Piedmont Courts had become dilapidated, and crime and drugs were plaguing the community.”6 Charlotte Magazine reported that by the end of the decade crime began to rise with the catalyst being the crack epidemic. Crack worked its way into poorer communities, like Piedmont Courts, where burglary and other violent crimes began to affect the neighborhood.7 By the late 1990s, police began a violence reduction project in the Belmont neighborhood that included installing barricades to thwart easy access to drug markets and establishing relationships with local residents.8

Gentrification in Belmont has been a recent phenomenon. Charlotte Magazine interviewed Teresa Reid, a local resident who has lived in a Habitat for Humanity home in Belmont since 1994. As the house was being built, she questioned whether she wanted to live in the neighborhood. Two decades later, she remarked that new residents moving in were making the neighborhood nicer, but other residents are wary of the change. In 2015, the Charlotte Observer compared neighboring Plaza Midwood to Belmont, specifically contrasting the economic inequality between the two areas. Plaza Midwood, in the top  ten percent of socioeconomic statuses, lay in contrast to Belmont, which was in the bottom ten percent. As crime steadily declined in the neighborhood, more whites began purchasing and building homes in the community, leaving lower income neighbors at risk of being priced out of their homes.9 And, in a community where seven of every ten residents rented in 2015, residents could face rent hikes or be terminated if their landlord’s decide to sell to real estate investors. 10

In 2011, the Belmont Community Association formed with the mission of continuing to foster a “safe, friendly and diverse community with neighbors working together.”11 The group meets monthly and organizes events such as walking groups and continues their community garden- the second oldest in Charlotte. As housing prices continue to rise and more affluent residents begin to move in, the fate of this historic working-class neighborhood and its long time residents remains uncertain.

2006 August 25, Justice discusses changes in the Belmont neighborhood where she had lived for forty years. She describes the recent effects of gentrification in the neighborhood and the hardships experienced by many long-time homeowners.

2015 October 31, McDowell lived in the Belmont and Optimist Park neighborhoods where she raised her children.

The collection consists of transcripts and interviews with residents of Belmont. They largely discuss their memories of Belmont and the Piedmont Courts Public Housing Development over the years.