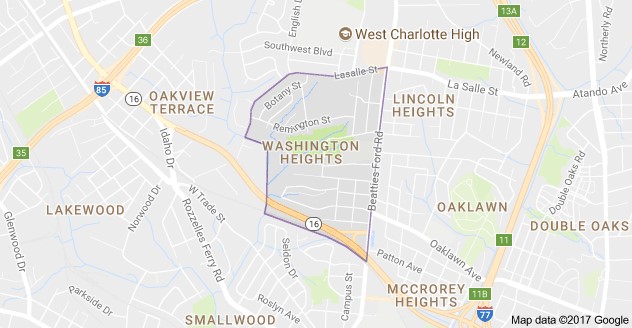 In the early twentieth century, districts such as Dilworth and Elizabeth were booming as suburbs as the city expanded, but they were kept racially segregated by “race clauses”. These race clauses were a fairly recent thing in Charlotte, though they were popular throughout the South and parts of the North at this time. However, “a suburban location seemed a fashionable and fitting attainment for families who had worked their way up from penniless ex-slavery in two generations.”1

With a rising Black middle class, white real estate developers decided to take advantage of the ready market. Walter S. Alexander, John M. Scott, and A.M. McDonald organized the Freehold Realty Company in June 1912 and bought a tract of farmland along Beatties Ford Road north of Biddleville. Washington Heights was created in 1913 as a planned neighborhood for middle-income African Americans. The new streetcars were extended into Washington Heights to make it a streetcar suburb. Unlike other suburbs around Charlotte, Washington Heights had no race restrictions for buying or renting properties.2

About 200 one-story houses were built during the 1910s-1930s, ranging in price from $500 for a lot on Beatties Ford Road, to $300. By June 1913, a year after the creation of the Freehold Realty Company, 43 lots had been sold. The market boomed until 1919 from the economic depression that followed World War I.4

Until the late 1930s, high school students (grades eight through eleven) from Washington Heights had to travel to Second Ward High School, the city's only secondary facility for Black students. In 1938 the city school board decided to build West Charlotte High School on the old Thad Tate farm for African American students.5

Following the Great Depression, Beatties Ford Road experienced an uptick in commercial growth. Wooden storefronts were replaced by concrete and brick buildings. Grocery stores, pharmacies, barber shops, and beauty salons appeared to serve the local residents.6 The area was referred to as “The End” because the streetcar line ended right at the new commercial district. In 1938, streetcar service discontinued. However this did not stop business from booming.7 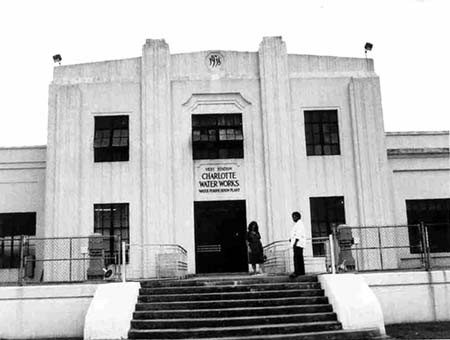 In 1940, Jimmy McKee and his wife Minnie started the Excelsior, a nightclub. Built in the Art Modern style, the Excelsior has hosted many famous African American musicians. Local player Wilbert Harrison started at the Excelsior Club before launching to national fame with “Kansas City.” Community leader “Genial Gene” Potts, WGIV radio host, made the club his informal base of operations. The club also played host to numerous Civil Rights leaders as they planned their strategies for Charlotte. After Jimmy McKee’s death in 1985, local television personality Ken Koontz and Civil Rights attorney James Ferguson made sure the Excelsior would continue.8

In the 1970s, part of the neighborhood was demolished for the Brookshire Freeway (I-277). Douglas Street disappeared, houses and all, and was replaced by a freeway entrance ramp. The land originally set aside for Lincoln Park was also sold for redevelopment.9

In the more recent decades, there has been an uptick in crime as well as a deterioration in the appearance of the neighborhood. However, the Historic Washington Heights Neighborhood Association decided to take back their neighborhood and return it to the family friendly suburb it was. In 2002, the Association worked with the City of Charlotte to develop the Neighborhood Action Plan, adopted by the city council. The plan focuses on preserving the historic neighborhood and making it more livable for current and future residents.10 The Association has since developed partnerships with Time Warner Cable (now Spectrum) and Charlotte Mecklenburg Schools to bring internet access to the community and with Charlotte-Mecklenburg Police Department, which opened a division office in the neighborhood in September 2009.11 The new office has since improved the neighborhood’s problems with drugs, alcohol, and violence. On March 19, 2016, board members of Historic Washington Heights attended a Neighborhood Board Retreat at Johnson C. Smith University and run by the City of Charlotte. Their purpose was to “Generate meaningful conversations around improving quality of life in our community; Set clear goals and priorities for the upcoming year(s); Develop a vision and strategic priorities for our community.”12

C.H. Watson, "Colored Charlotte: published in connection with the fiftieth anniversary of the freedom of the Negro in the county of Mecklenburg and the city of Charlotte, North Carolina," A.M.E. Zion Job Print, 1915.

Interviews conducted by students at the Honors College of the University of North Carolina at Charlotte in conjuncture with the Charlotte Action Research Project (CHARP).