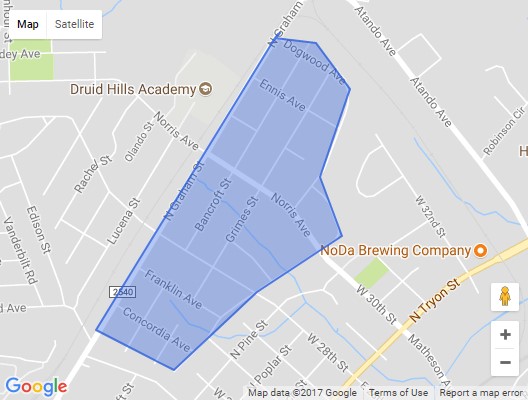 Many of the houses of Graham Heights were built in the 1950s, with owners buying their homes in the 1960s. Most houses are about 1,000 square feet. The neighborhood has three churches, including Walls Memorial AME Zion Church, as well as Charlotte Fire Station 11. Many of the now elderly resident homeowners are still there. As folks pass away however, new landlords do not necessarily keep up the properties with the same level of pride and vacant houses are targets for looters, particularly for copper.1 Despite these problems, Graham Heights is not plagued with crime, which has kept it under the radar.2

The Graham Heights Neighborhood Association was organized in 1985 with a president, treasurer, and secretary. Mary Clarke served as the first president. The association originally met at Walls Memorial AME Zion Church. Now, the association has twelve block captains, a beautification committee, sick and bereavement committee, and an event planning committee.3

Graham Heights was chosen in 2011 to be part of the Charlotte Action Research Project (CHARP), which is partnered with the Charlotte’s Neighborhood & Business Services. Graham Heights was chosen to be part of CHARP based on its potential to succeed. The neighborhood received a Power 2 Live Green Grant from the City of Charlotte to assist residents with their energy bills.4 Graham Heights residents decided to start with a focus on beautification, moving then to adult computer classes, and placing trash cans at city bus stops.5

2001 May 11, Describes her experiences working for the NAACP, the racial violence used to attempt to silence the NAACP, & her motivations for making health care & health education her top priority while serving on the Charlotte-Mecklenburg Community Relations Committee.