History of the Brooklyn Community

The Brooklyn community lay in what is now Second Ward, an area of Charlotte that was geographically lower than the other four wards, and for sewage and sanitation purposes, made living there hazardous. An 1892 Charlotte Townships map identified the area as “Logtown.” After emancipation, the area drew recently emancipated slaves. The community’s Black population continued to grow throughout the nineteenth-century and was “solidly black except for Trade, Tryon, College, and parts of Fourth Street,” when the first racially patterned map of Charlotte was drawn in 1917.1 At the same time, Logtown gave way to Brooklyn; a name that would become synonymous with the Black community until urban renewal.

In its heyday, Brooklyn was a thriving Black business center; “an African American city-within-the-city, complete with its own downtown.”2 While the socio-economic level of residents spanned from shanty housing, like Blue Heaven, to the homes of Charlotte’s Black professionals, the community marked many “firsts” for Charlotte’s Black residents. Built in 1886, the Myers Street School was Charlotte’s first Black public school, operating until 1907 when the original building closed.3 The school was the first Black grade school in the county and families flocked to Brooklyn for their children to receive an education and because segregation had begun to push Black residents out of other communities.4 The community was also home to Second Ward High School, the city’s only Black high school which served the community from 1923 to 1969. The community contained the city’s Black YMCA and library. The Brevard Street Library opened two years after the Carnegie Library refused to admit Black patrons. The Brevard Street location served as its “colored branch” and was the first free library for Black patrons in the state of North Carolina.5 The A.M.E. Zion Publishing House, also located in Brooklyn, published all printed materials for the A.M.E. Zion denomination in America and issued its monthly newspaper. The publishing house was one of the few Black owned businesses where black men could be employed and trained in a white collar profession.6 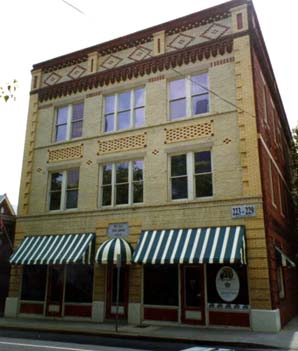 Aside from being a commercial center for the Black community, some of the most distinguished Black Charlotteans lived in the neighborhood. J.T. Williams was a business, medical, and political leader who built an elegant home on Brevard Street. He was appointed U.S. Consul to Sierra Leone under President McKinley, and served from 1898 to 1907.8

Hanchett suggests that what made Brooklyn a community was the creation of Charlotte’s Black main street after 1900. Political disenfranchisement led black citizens to turn to economic development within the Black population, taking the advice of turn of the century Black leaders, the community sought to cater to the needs of its own race and supply the daily necessities and trades their community needed.9 And more businesses flooded in as high rent prices drove them out of white neighborhoods. During the late 1930s and throughout the 1940s, federal programs made mortgages available and developers began erecting housing in the west side of Charlotte to sale to Black Charlotteans. These effects purged some of the Brooklyn community, who headed west with the building of West Charlotte High School; a new facility that would be open to Black people.10 Further detrimental to the community was the building of Independence Boulevard which cut a “long gash” through Brooklyn, exposing blighted areas of the worst sections of the neighborhood. Ordinary citizens were alerted to the problems of these slums at about the same time the federal government began providing money for demolition projects.11 Sadly, when the city’s new zoning plan was announced in 1947, all of Brooklyn received a new label; “industrial”.

In 1958, the Charlotte-Mecklenburg Planning Commission authorized a study to locate and determine the extent of blighted areas in the Brooklyn community, in an effort to receive grant funding to renew the blighted area. Some of the reasons for renewal which were mentioned were the lack of improvements to streets, “rude and primitive” housing that was built too close together, general overcrowding, and inadequate provisions for ventilation, light and air. According to North Carolina law, at least two-thirds of the residential portion of a community had to contain dilapidated or deteriorated buildings for the area to be considered blighted. The survey found that seventy-seven percent of the residences in Brooklyn were blighted by 1958. Higher incidences of tuberculosis and infant mortality were found as well.12

The Federal Government approved the project, granting the city $1,432,000 to clear thirty-three acres of “slum area” and relocate “about 250 families and many small businesses.” The project proposed the area be used for light industry, office buildings, and public buildings, creating a civic and government center around the City Hall located in Brooklyn.13 In 1960, the Charlotte Redevelopment Commission published a pamphlet called “The Brooklyn Area,” praising the city’s urban development efforts as a way to “rehabilitate 1600 families… clear the slums [and] change the land use patterns.” Compare the Old Brooklyn of 1960 to Redeveloped Brooklyn, or Second Ward, in the 1970 proposed photograph. 14 The images clearly depict the demolition of residential neighborhoods in favor of a streamlined, government center. 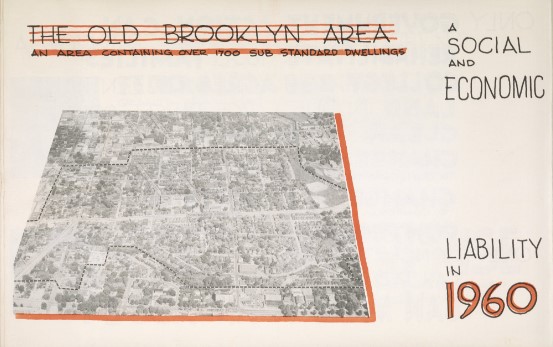 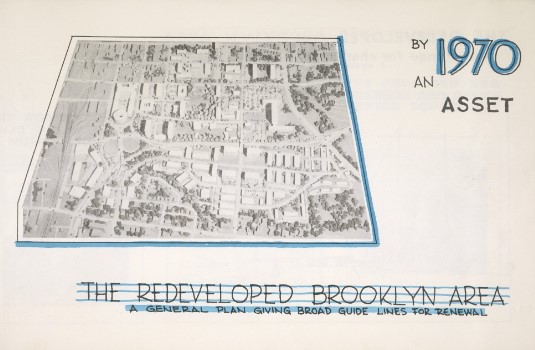 But Brooklyn residents, Black families, were hesitant of the plan. The Kelly Alexander NAACP papers depict a different story; one of residents being extorted through high rent while be forced to live in substandard housing. At the same time, residents were being pushed out of the neighborhood with nowhere to go. In 1958 Alexander wrote to the Redevelopment Commission questioning its relocation program for Brooklyn families; ninety-nine percent of whom were Black. He added “There is no public housing under consideration and the poor Negro families in the area are the victims of landlords and real estate men who are concerned only with making a profit.” In fact, no low-rent public housing had been built in Charlotte since 1953. Kelly and his supporters felt displaced families would be forced into segregated housing and that the city was making a mistake by determining that Brooklyn land would be used exclusively for commercial and industrial purposes, and not new housing projects. Black businesses were also at risk of being forced out to maybe never open again. The NAACP also wrote to the Housing and Home Finance Agency explaining that Black residents were not asked to participate in relocation plans and all plans that were confirmed by the city were being undertaken without the advice of the community.15 Basically, Brooklyn residents were being shuffled from one slum to another because their wages did not allow them to compete for adequate homes. 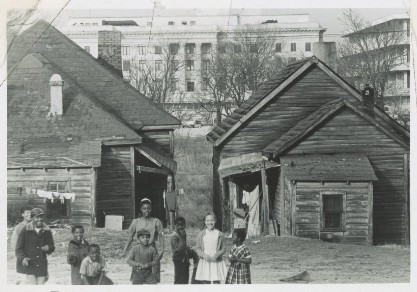 Children gather in front of two houses with City Hall visible from their backyards. This 1964 image depicts Brooklyn housing prior to urban renewal.16

Between 1960 and 1967, Brooklyn was razed in five stages. Not a single new residential unit was built to replace the 1,480 demolished homes and ultimately, 1,007 families were displaced, mostly to northern and western portions of the city. Black businesses which relied on Black communities to thrive were forced to close. Two hundred and sixteen closed in Brooklyn, many never reopening.17 Thankfully, the city learned from the Brooklyn program. When First Ward underwent urban renewal, some low-income housing was built.

The Brooklyn Story, a pictorial history developed by the Charlotte Mecklenburg Afro-American Cultural Center probably stated it best when it decried that Brooklyn had been an essential staple for the Black community for over one hundred years. A “nurturing ground for black culture encompassing the whole spectrum of economic, political, social, religious and educational life.” That special, self-contained enclave that developed in Brooklyn remained a sense of pride for the community until business and residents were broken up and the community demolished in the 1960s, aside from efforts to save its history.

Images of the Brooklyn neighborhood. From MS 350. Charlotte Redevelopment records.

2001 May 10, Speaks of growing up in Brooklyn in the 1950s and how segregation impacted his childhood. Son of prominent Civil Rights leader Kelly, Alexander, Sr.

2004 May 12, Mr. Dial reminisces about his childhood and youth growing up in Charlotte's Third Ward. He also discusses nearby communities, including Dilworth, Brooklyn, Blue Heaven, Greenville, Cherry, Second Ward, and Biddleville.

2006 December 1, Recounts his life in Brooklyn and time as a student athlete. He speaks to his involvement in Charlotte's integration, and how urban renewal displaced black residents and kept them out of inner-city housing.

2004 March 25, Attended school and later taught at Second Ward High School. She speaks to the sense of community in Brooklyn prior to urban renewal, how residents reacted to it, and what was lost after the community was forced apart.

2006 November 26, Describes attending Second Ward High School and her school years. Explains her views on urban renewal; particularly, how the breakup of African American neighborhoods was detrimental to the black community.

2005 May 2, Shares his experience of growing up in Brooklyn in the 1930s and 1940s, attending segregated schools, and the overall diversity of the community's residents.

2005 February 1, Both attended segregated Second Ward High School in the 1950s. They discuss teenage life in Brooklyn, jobs they held in the community, and the integration of Charlotte's schools.

2004 April 1, Speaks  to how close-knit and self-sufficient the Brooklyn community was prior to urban renewal. Discusses her childhood in Brooklyn, as well as her time at Second Ward High School.

2006 November 18, Shares her opinion of social issues that plagued Brooklyn, such as low quality housing, forced relocation, low wage jobs and problems with drugs and violence. She speaks to the negative effects of urban renewal, and later, gentrification.